Live in Amsterdam at PuntWG during The Homestead Principle #7: A Beautiful Corpse In An Exquisite Morgue. With Philip Grozinger‘s “We can still have human interaction” hanging in the background.

The Homestead Principle #7: A Beautiful Corpse In An Exquisite Morgue

Tomorrow Leilani and I will be travelling to Rotterdam’s Roodkapje where we will perform as HEXENEICHE at MiMa #32. Other acts that night will be Mittland och Leo from Antwerp who will be playing a “psychedelic organpop and atonal synth weirdness as sensualizing cherries on top of a minimal beat cake” plus Vakantie which is made up of “two cheerful beat making boys straight out of Groningen, where they are also part of De Gym, an amazing venue in the heart of the city centre. Armed with synth’s, loopers, delayyy and a laptop these guys sounds like the perfect bond between analog and digital”. We hope to see you there, this time we will not forget our cd’s and tapes that we’d love to sell to you!

The Homestead Principle project by Sebastiaan Schlicher comprises a series of artistic takeovers of gallery spaces and art venues through site-specific installations and noise performances (‘performative installations’) created with his collective Amerikan Teenager.

The series next installment takes place on november 8, 2014 during the annual GLOW Eindhoven festival, when Amerikan Teenager will host an artist-run Band Camp at Het Glaspaviljoen.

During this 5th artistic takeover, visitors, artists, musicians and passers-by are invited to spend the day on the Pavillion’s premises, exchange thoughts and ideas and engage in preparatory activities for the evening’s programme of music and performances. A sculptural multimedia installation whose construction will serve as a backdrop to these events will remain on display in the pavillion until the 15th of November.

An aural document of the event will be released on audio cassette through Eindhoven’s Barreuh Record label towards the end of the year. 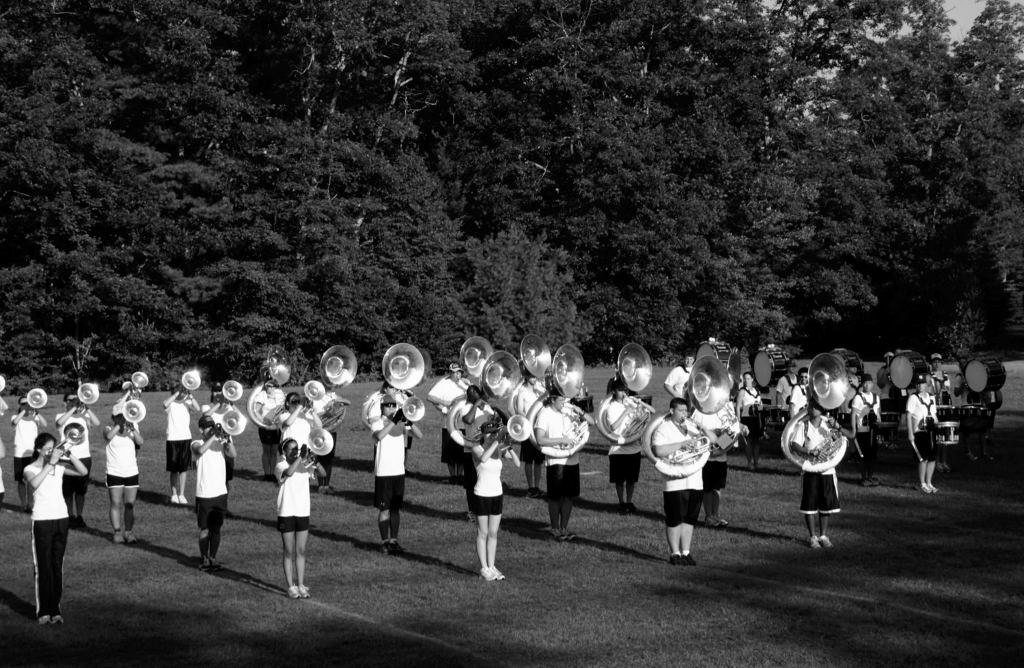 In a couple of weeks HEXENEICHE will hit the road together with City Hands and Arvind Ganga. We’re putting together a tour “as we speak” and so far we have dates in Vienna, Berlin and Bremen. Keep checking my gigs page to see additions to our list. Below the poster for the show in Vienna!

The Four Elements that I refer to here, is a cassette that came out on Korm Plastics back in 1990. On its cover it showed a visual score by Frans de Waard and it featured six musical interpretations of the score by acts like THU20, Kapotte Muziek and Massimo Toniutti. That visual score always intrigued me and for years I’ve been carrying it along in my mind with the intent to make a musical piece for it… someday. I finally made my interpretation of it and soon this 20-minute track will be released on Moving Furniture Records. The original score lasted for 7 and a halve minute but I have taken that “carrying in mind” part to another level: I didn’t look back anymore to the original score but instead started using the score that had been maturing in my head. Listen to a preview below via soundcloud.

It’s been about 8 months since I was working in the Extrapool studio with Sigtryggur Berg Sigmarsson, on an album for the BromBron project. I’m still not sure when exactly it will be released, but I do know that it’s gonna be soon. Sort of. I guess? Below a sneak peak of the great artwork for the upcoming album made by Astrid Florentinus!

Just got word today that I can play this years SOTU festival in Amsterdam! This Sunday the 12th of May I’ll replace Aart Strootman of DU013 and thus play an impro set together with Bram Stadhouders. Last time we shared the stage was back in April 2008 so I’m looking forward to this reunion! We’ll start playing around 18:00 hrs at Budapest. Hope to see you there!

The ever so lovely Foxy Digitalis posted a staplerfahrer mini-featurete on their blog with 2 album reviews by Travis Bird and it goes like this:

“In abstract sound exploration, there’s some kind of instinct that guides certain folks, who seem to simply feel things on an uncommon level. Few I’ve heard recently have honed this instinct as well as the Dutchman Steffan de Turck, as exemplified on a pair of 2012 releases under his Staplerfahrer moniker.

A Staplerfahrer solo CD, “Burying Lamps In The Deep Solitude” (Striate Cortex) shows off de Turck’s engagingly slow pacing. Extended sine tones and field recordings are punctuated with blasts of noise, oscillations, and rogue guitar notes. It’s minimal in the sense that there are few elements and they’re allowed to move and breathe, but it’s not really in the usual spiritual/meditative mode; there’s a sense of the musician at work throughout each piece, a more exploratory feel. De Turck isn’t afraid to play a watery field recording for several minutes before introducing extremely light processing. Even in such abstract environs, there’s something narratively engaging; like an accomplished jazz musician, de Turck always seems to know where he is and how a given moment relates to the whole.

“Exiled in Bilbao” works in a similar way in a collaborative format. A co-release by a quartet of labels (including de Turck’s own Dim Records imprint), Larraskito Audio Dissection Unit is a crew of eight European ringers in different combinations, including Sindre Bjerga and Jan M. Iversen along with de Turck. Recording in Bilbao, Spain, the experts here bring a hugely diverse, inventive, and resourceful sound palette, making for some fascinating sound environments that are uniformly dynamic and evocative. Distorted guitar notes, single-note drones, rhythmic loops, and lively modular textures work with subtle field recordings to make up these pieces. There are time-based elements like radio static, but only the barest narrative emerges; instead, there’s a lot of imagery. At times sounding quite urban, at other times hinting at musicality, and at still other times overtly nature-oriented, they remain abstract and not easily categorized, all marked by an unhurried pacing and rare self-assuredness, especially in such a format. Both CDs showcase de Turck’s strengths as an improviser, composer, and tinkerer, his patience and contemplation stemming from a true affinity for sound for its own sake.”

You can also read it on the Digitalis site over here (along with lots of other great in depth reviews and articles).

This is going to happen next month! Great night with all kinds of music organized by friends and featuring even more friends! EZDANITOFF is the project-driven collaboration of Dutch soundartists FRANS DE WAARD and WOUTER JASPERS. Ezdanitoff reinterpretates the past of experimental composed music, creating new work around different theme’s and techniques. Currently Ezdanitoff is on tour with their project “Bandwidth,” based on John Cage’s Imaginary Landscape 4, in which they perform live with radio signals and analog electronica. For the concert at OCCII Ezdanitoff teams up with Canadian wunderkind STAN STENCIL, who will give the perfect visuals to Ezdanitoff’s psychedelic soundtrack!

Amsterdam’s own purveyor of percussion and sound, RORO is a drummer who experiments with free percussion sounds. He plays with improv group DAGORA & collaborates with many other mad men & women – he is recently returned from tour with Earth’s Dylan Carlson and preparing for another as drummer with Marshal Allen of Sun Ra & film maker James Harrar.

2012’s been good. Didn’t do a lot of shows this year, but the one’s that happened were memorable: touring with Mik Quantius, Sindre Bjerga and Andrew Perry in February, visiting dOCUMENTA(13) in Kassel and playing at Oldseed’s cosy little bar, nocturnal soundscaping in a Dutch nature reserve alongside Bram Stadhouders, Jos Smolders and Wouter Jaspers, discovering the beauty of Slovenia while performing at the awesome Šinafest in Idrija and finishing the year by doing an unforgettable artist-in-residence program with Sigtryggur Berg Sigmarsson at Extrapool in Nijmegen. I released one album in 2012, but proudly on Radio Free Midwich’s label of the year: Striate Cortex. What will 2013 bring? The collaboration with Sigtryggur wil be released on CD through Korm Plastics and other stuff is in the pipeline, new gigs are planned in Amsterdam and Hamburg with others to be confirmed and together with Leilani I started a new musical project called HEXENEICHE. We’ll keep you posted and wish you a happy new year!